How to set logic levels in LTSPice to 5 volts?

How to change logic levels in LTSPice?

Right-mouse-click on the device in your schematic.

A dialog will be shown.

Enter the parameter(s) into any of the fields
from "Value" to "SpiceLine2".

"Ref" is the threshold. Default is (Vhigh+Vlow)/2 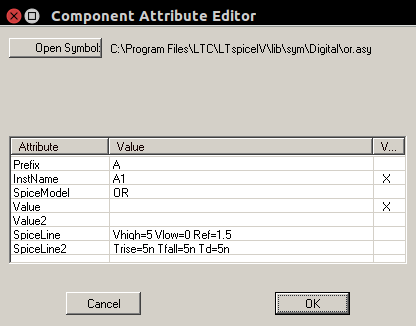 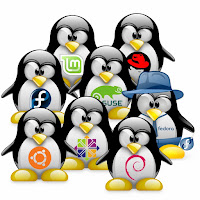 I have also tested Linux distribuitions since the very beginning, Slackware, Debian, RedHAT, Suse, Lubuntu, Ubuntu, etc.  We used to buy magazines with a bundled CD/DVD-ROM that offered the Linux version for local install.  At that time Internet was only available in academic, companies or research centers.  Most of us used dial-up landlines to a local BBS.  The trend was to get your win-modem to work with Linux.

My very favorite operating systems for some time now, is Ubuntu Linux. Here's why:

1. Open Source and free to use. You can install it on as many computers as you like for the pretty price of absolute what you want to donate, or zero if you cannot spare some cash for now! This makes it wonderful for those on a budget, students and who get tired of constantly paying for expensive operating system upgrades.

2. It is the most stable OS that I have tested these last 30 years. I've put my kid on Windows boxes in the past only to have him mangle the operating system beyond recognition in a few short minutes. I've then put the same kid on an Ubuntu Linux box and left him playing happily for hours. 'Nuff said.

3. It's “wife” proof, that means, my wife, who is a lawyer, and does not like technology, does not call me so often like when she was using struggling with Windows, say goodbye to "my files are gone!", “updates bugs”, “virus alerts”, “BSOD”, “bad drivers”, etc.


4. Usually no Viruses or Malware. There aren't currently very many pieces of malware around for Linux boxes.  The way Linux is designed makes it very difficult for the bad guys to design malware or to crack it. As a result I don't have to bother wasting my precious computer resources on expensive antivirus programs, or having to recover my wife's or kid's system every week, hurray!!!

5. Your desktop graphics interface is a selection that can be: Unity, Gnome, LXDE, or other options of very easy to use GUI . In many ways the ease of use reminds me of the Mac computer concept when it hit the market back at the 80's but without the high price tag.

6. I can keep using my older computers as long as I want with Linux. Not only are upgrades free but the resource requirements are low enough that even older computers can use lighter versions like Lubuntu (i.e. just to mention on option), so I don't have to stop using a computer until I am ready to move on to a new one.

7. There are many open source packages that are GPL, GNU, free or pay as you need it, software available for most of all your needs.  You name it, Ubuntu has it, probably for free. They have Photoshop equivalents (Gimp), Office suite (Libreoffice), programs to see your images, hear your music, see all video types and decode streams with programs like VLC (ie. Players ) and more games (both educational and same really hot) than I have ever seen! There are programs available for Linux for literally ALL age groups and needs.

8. You can continue to use your many DOS, Windows 98 or XP, codes with WINE which runs windows codes right on you Linux screen. I use it to run LTSpice engineering circuit simulation and AXDecrypt for my confidential documents.

9. It is very powerful but at the same time very simple once you get basic “know how” of the system. While I can do almost everything I want to in the GUI, if I want to do something more complex I can always drop down to the command line and take care of business, because now I have "the power" with bash, python, C, and many other compilers and builtin tools.  For instance, I can navigate my mouse to the menu to shut down my Ubuntu computer or I can open a terminal and type "sudo shutdown -h now" or even "sudo poweroff"  at the command to turn the system off.  Ubuntu will ask me for my password and then shut the system off faster than the GUI menu ever though of doing!

10. No worries about NSA spying on you with backdoors. It is a known fact that the NSA is trying to spy on everyone. Chances are they have backdoors built into both Windows OS and applications and even on Apple computers that enable them to keep us all under surveillance. Since the source code on these operating systems is closed (some Apple Mac OSX source code is open, however), users have no way of knowing just how secure their computer really is. With Ubuntu, the source code is open so programmers all over the world look through the code to prevent these backdoors in Ubuntu.

11. It is usually easy to install hardware in Ubuntu (i.e. with exception of win-modens and some less known printers).  Plug in your printer and in moments Ubuntu has installed it. The same goes for wireless cards and many other devices commonly available. But hunting for drivers can be an issue some times, but installing bulky software or dealing with nag screens harassing you to register is gone. Most things just work, which makes life so much easier. Even my favorite old bed scanner that was dead because of lack of the right drivers for Windows 7 returned to life in Ubuntu! Yes!!!

12. A very big community of mostly friendly users, like me, with many thousands of web knowledge pages with “Howtos”, “instruct-ables”, “blogs”, “wikis”, shared experiences of almost any problem you can encounter in your life with Linux.

13. These are just same cool facts about my life before and after Linux. Let's face it, you need to be committed to get in to a better understand the Linux ways, but it is something rather FUN taking control again of your computing experience, like in the first years of home computers (ie. Sinclair, Apple II, TRS-80, Commodore, etc). Few things are as enjoyable as turning on your computer and hearing the gasps when you don't boot up Microsoft Windows.

Sure you may have to learns to answer new questions, learn a new GUI, but doing so not only spreads the word about this great operating system and also help someone to save a computer that they would otherwise throw away or loose the opportunity to “discover new worlds and boldly go where no user has gone before!”